I recently went on a trip to Busan, another city in S. Korea, with two of my good friends, Katie and Heather. Katie wrote an amazing blog post about our experience. Since I didn't want to re-create the wheel, I am sharing her thoughts on my blog, as the same story involves me! Thanks Katie for your awesome skills!

Beautiful Busan
Our much anticipated three day weekend was finally here! Tickets to Busan had been booked several weeks prior and we were all ready for our mini vacation. What better place to spend it than on the beach?
We woke up at 5:15am and departed for Seoul Station at 5:40 where we would catch our train to Busan. 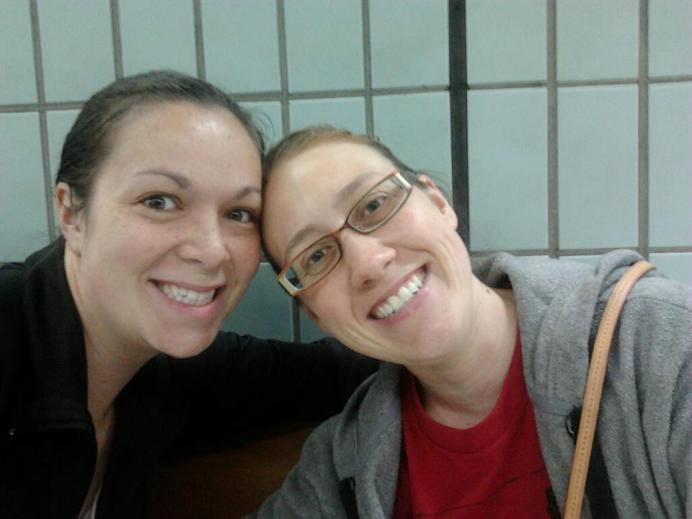 We picked one of the earliest trains as we wanted to make sure we had the maximum amount of time possible in Busan. We had previously decided that we would only bring backpacks because after all it was only two full days and nights. Jenn however seemed to miss the memo and decided it was necessary to bring an entire duffel bag full of stuff. 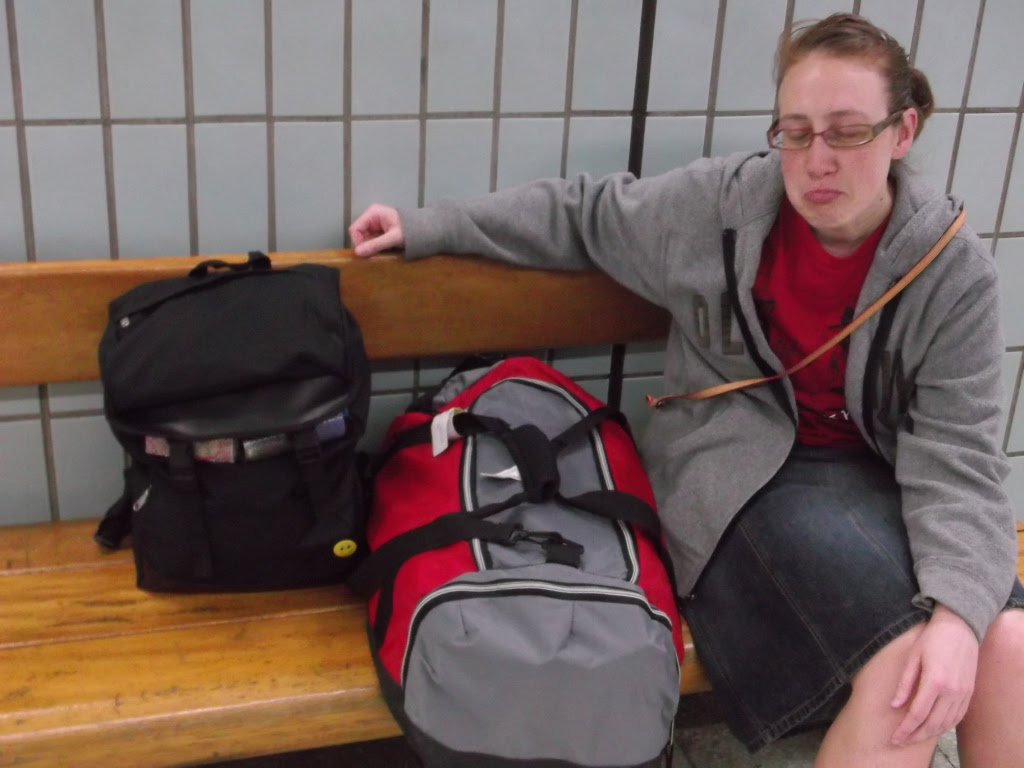 We arrived at the station, got our tickets, and had a few minutes to spare so we grabbed what one might consider to be the breakfast of champions: Dunkin Donuts coffee and blueberry muffins. We were starting off our vacation right! 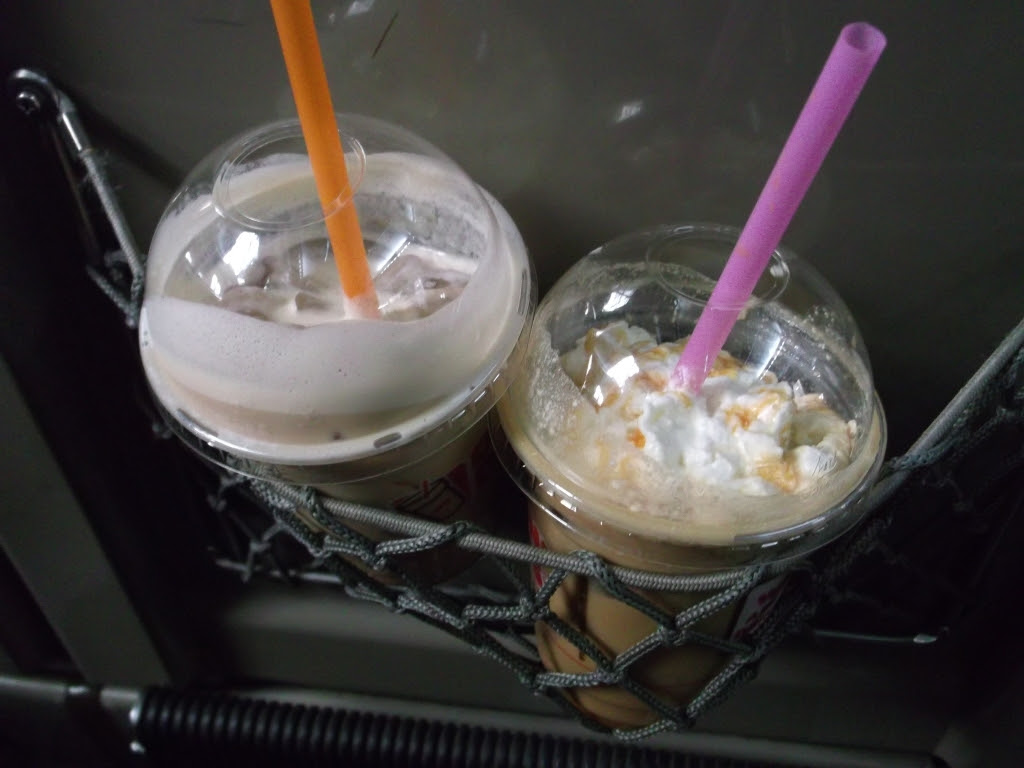 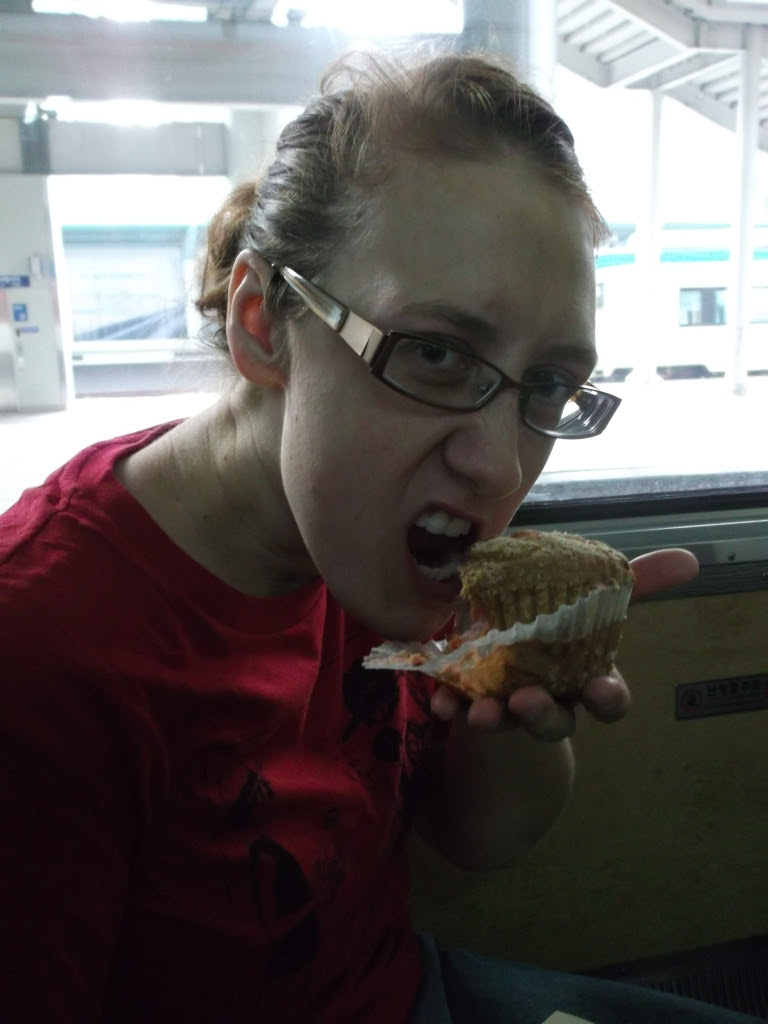 Because we had such a long train ride (5 hours) and we had woken up so early we decided that a nap was in order, after all, we were on vacation. Jenn went right to sleep, however, due to the caffeine, I just couldn’t sleep. So, to occupy myself, I took photos. Poor Jenn. 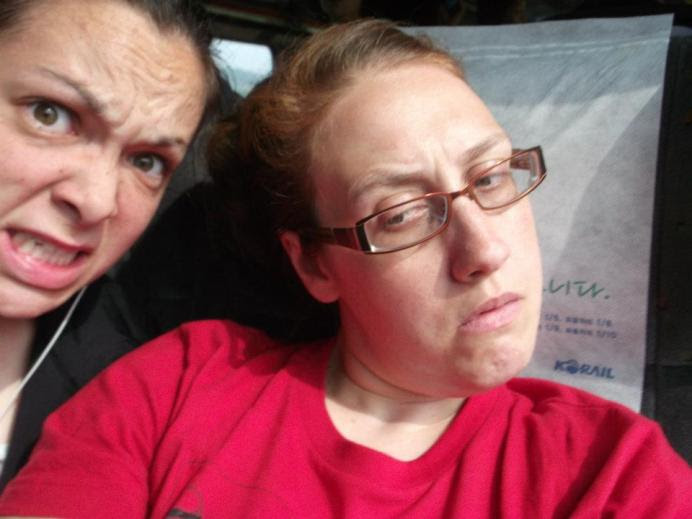 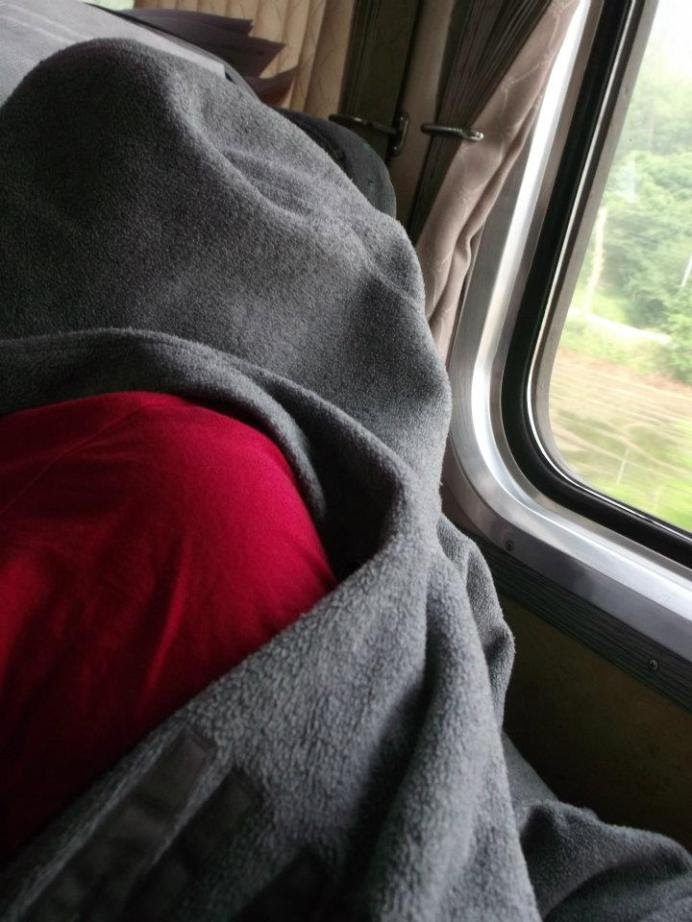 The train ride to Busan was incredibly crowded. All seats were taken, many people were standing, and the noise level was next to unbearable. Well not quite, but close. The ride seemed to be going on for forever causing Jenn and I to go a little stir crazy. We made a ‘friend’ on the ride, a young Korean man in the Air force with whom we shared our pringles with. He didn’t have a ticket for a seat so he literally stood the whole time. Jenn and I got up to go visit Heather who was a few cars back and told him he could use our seats while we were gone. We came back about twenty minutes later and he was fast asleep. So we took a photo of him sleeping. Poor fellow. 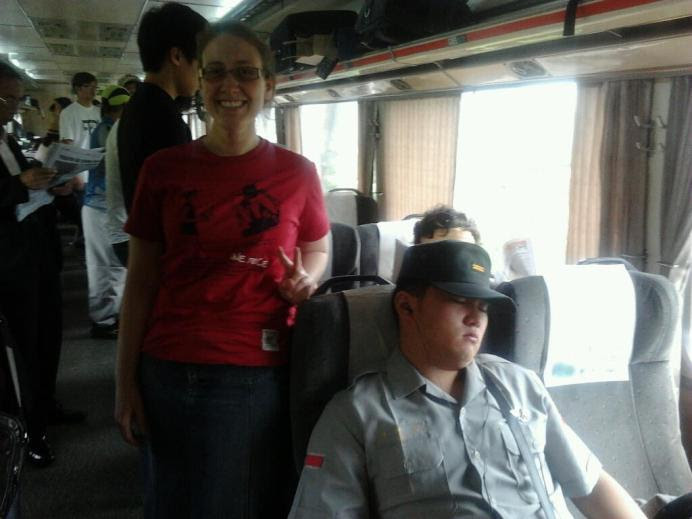 We finally arrived at Busan station and debated whether or not to take a cab to our hotel. We knew it was close to the station but we weren’t quite sure how to get there so we hopped in a cab and gave the driver the hotel name and address. He had absolutely no idea where it was which made us think either it was a really ghetto place or it was way out in the middle of no where. He slowly drove down a street by the KTX station and made us call the hotel so he could get directions. While he was driving and we were trying to call the hotel, Heather spotted the hotel-it was literally a three minute walk from the station. Oh, the life of a waygook in Korea. The cab driver just laughed and i know he was thinking “stupid waygooks”.
After we were checked into the hotel and had figured out how to operate the lights we set off for the beach. We decided to go to Gwangalli beach which we had heard was smaller and less crowded than the other beaches in Busan. Definitely a good choice. We arrived at the beach but decided to get food before setting up for our relaxing afternoon. We were starving seeing as how we really hadn’t eaten since breakfast which was eight hours prior. We found a place that seemed to be exactly what we wanted: The Fuzzy Navel. With a name like that why wouldn’t we eat there? They served Mexican food that was definitely legit, by far the best Mexican food i’ve had seen arriving in Korea, plus you could see the beach while eating. Double bonus. 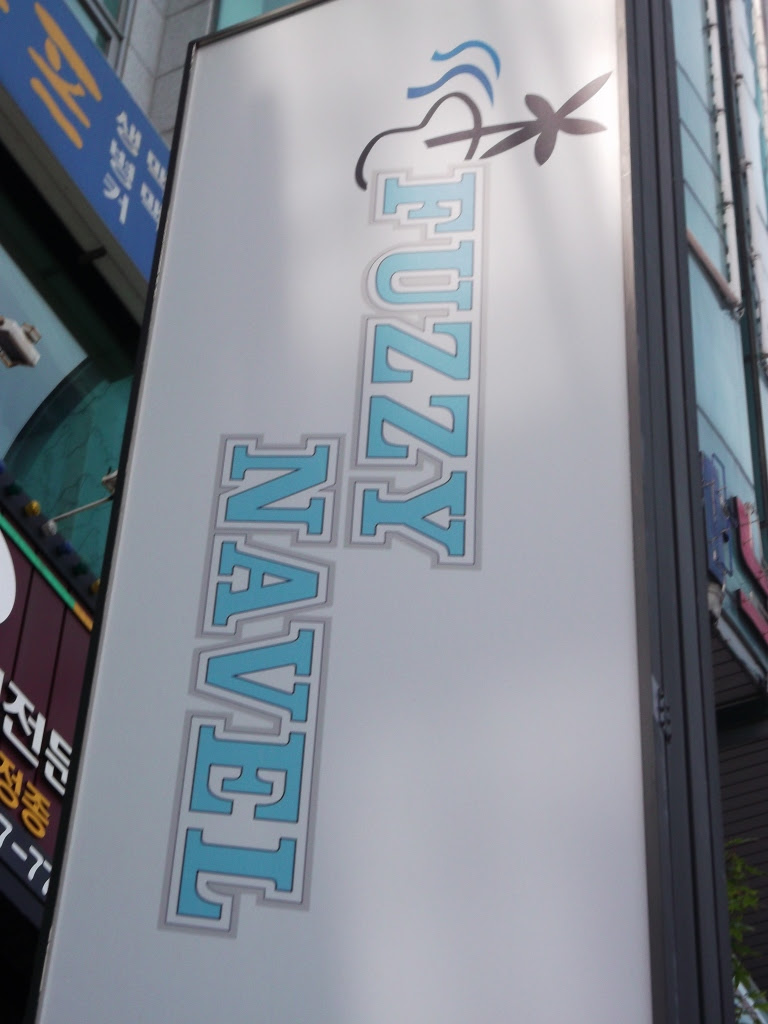 After lunch we walked over to the beach and set up for a relaxing afternoon. The beach and surrounding scenery was amazing. The weather was beyond amazing. There were many sites to take in…including a group of older Korean people playing their version of duck duck goose.  Free entertainment! We napped, read, chatted: relaxed. It was great.

After awhile, we decided to give the water a go, but it was far too cold. So cold in fact that even the fish couldn't handle it, hence the dead fish we spotted on the shore. It was disgusting. I couldn't look at it as his big ol’ nasty eyes were just staring at me. Jenn couldn’t even point at it. It was really just gross. What was even more repulsive was when some old Korean man decided it would be a good idea to PICK IT UP and give it to some children to play with! Since when did a dead fish become an appropriate substitute for beach buckets and Frisbees? But wait-it gets better. The children decided they would make a home for the fish. Yes, their parents were watching and encouraging these shenanigans. They even encouraged the children to KISS THE FISH AND POSE FOR A PHOTO! how is this normal? Time like this is when I shake my head and say, “oh Korea” 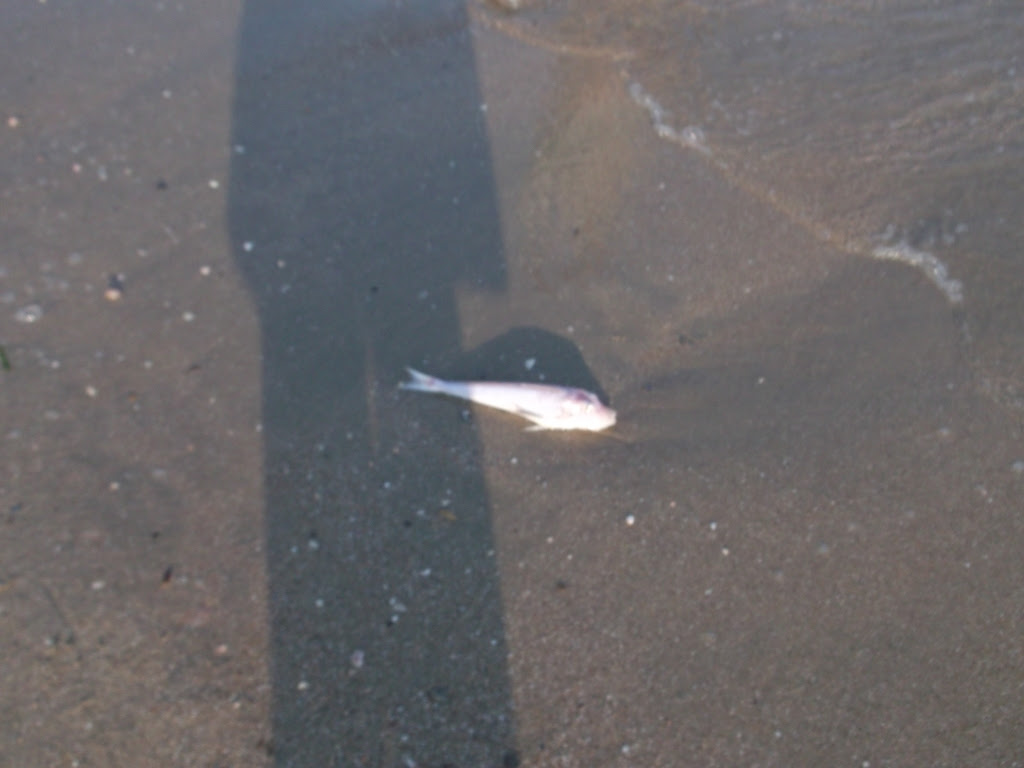 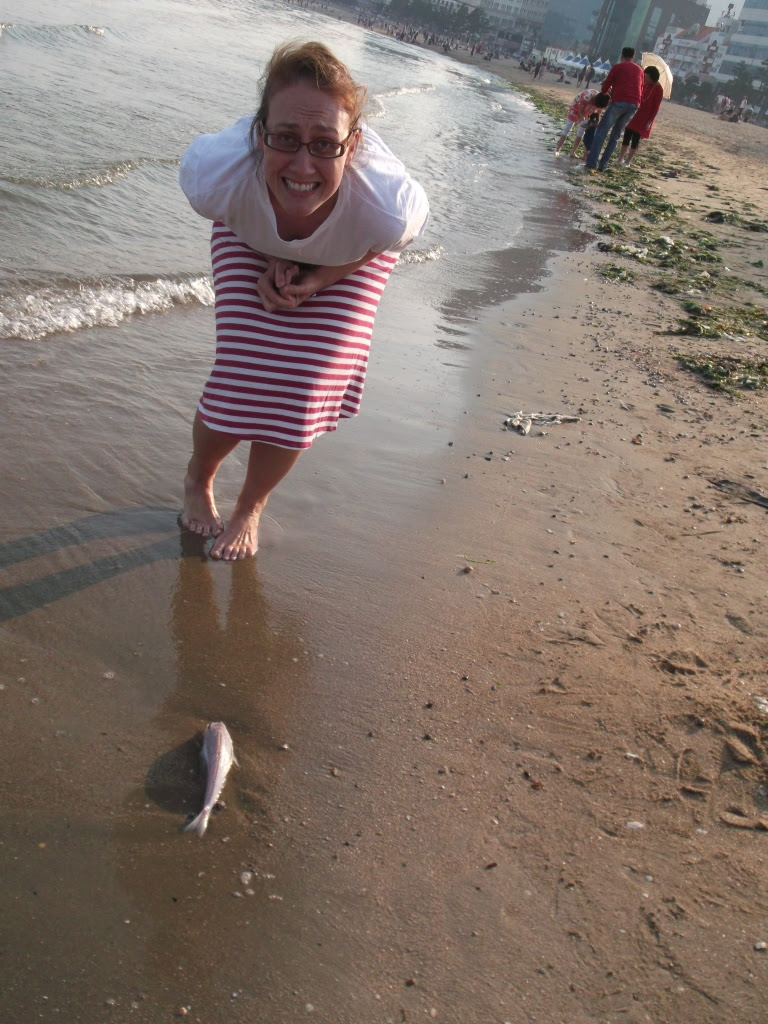 While investigating the dead fish we discovered that writing in the sand is something that even Koreans do and when in Korea…do as the Koreans…minus kissing a dead fish. Since Jenn has a phobia of sand (ironic seeing as how we planned to go the beach and the beach involves sand) Heather and I were the one to get down on our hands and knees and write in the sand: “Way-gooks in Korea”, waygook meaning foreigner. Many Koreans stopped and stared at us, reminding us once again that we are foreigners living in their land. We finished our sign, yet nobody would take our photo. Not entirely true. We had certain qualifications on you could take our photo. They needed to be tall, dark, and handsome. Okay, not really. Just tall. For the best photo it needed to be taken at a certain angle, so we had to be specific with who could take our photo. A tall waygook finally walked by and kindly took our photo. Life was complete. 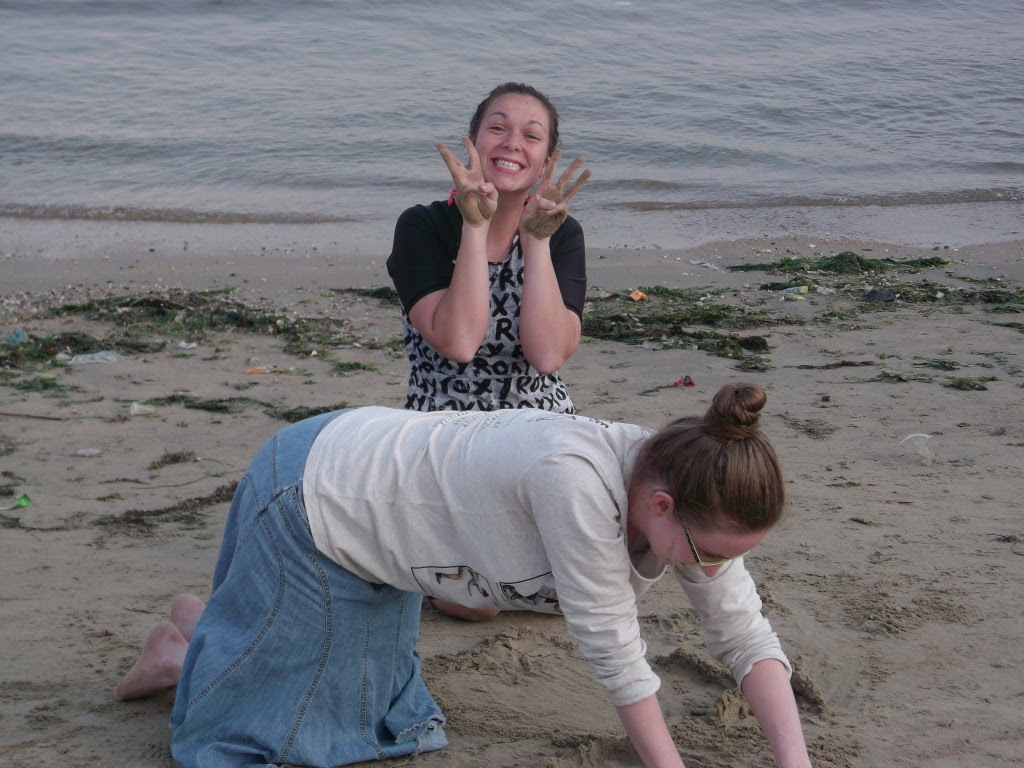 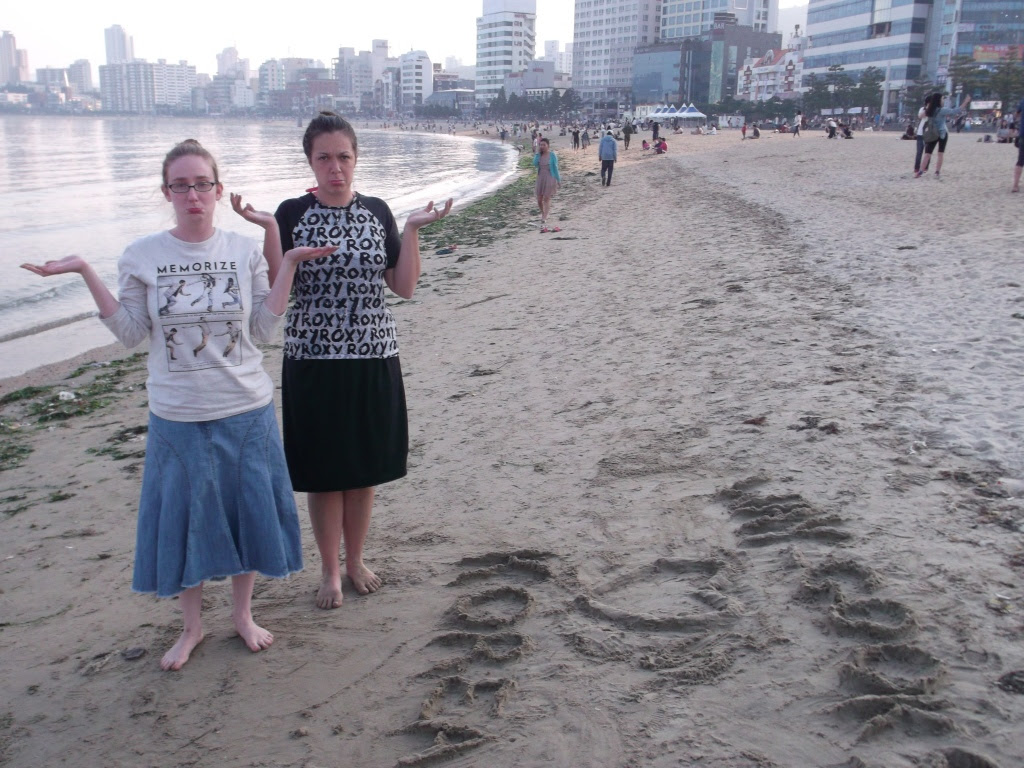 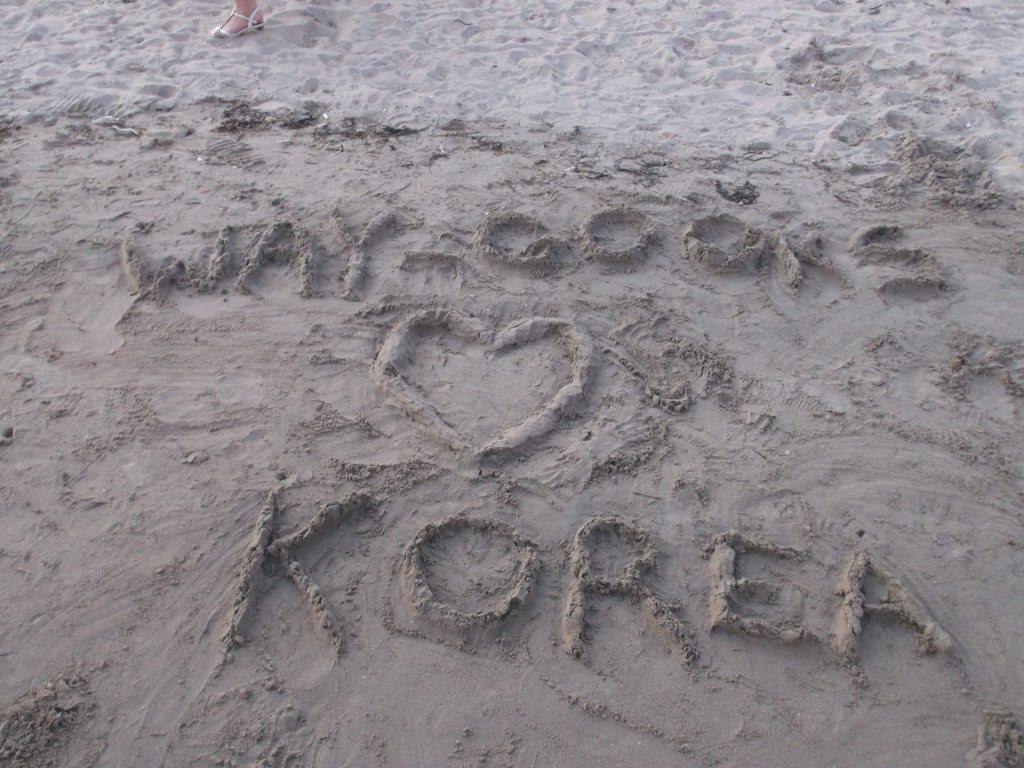 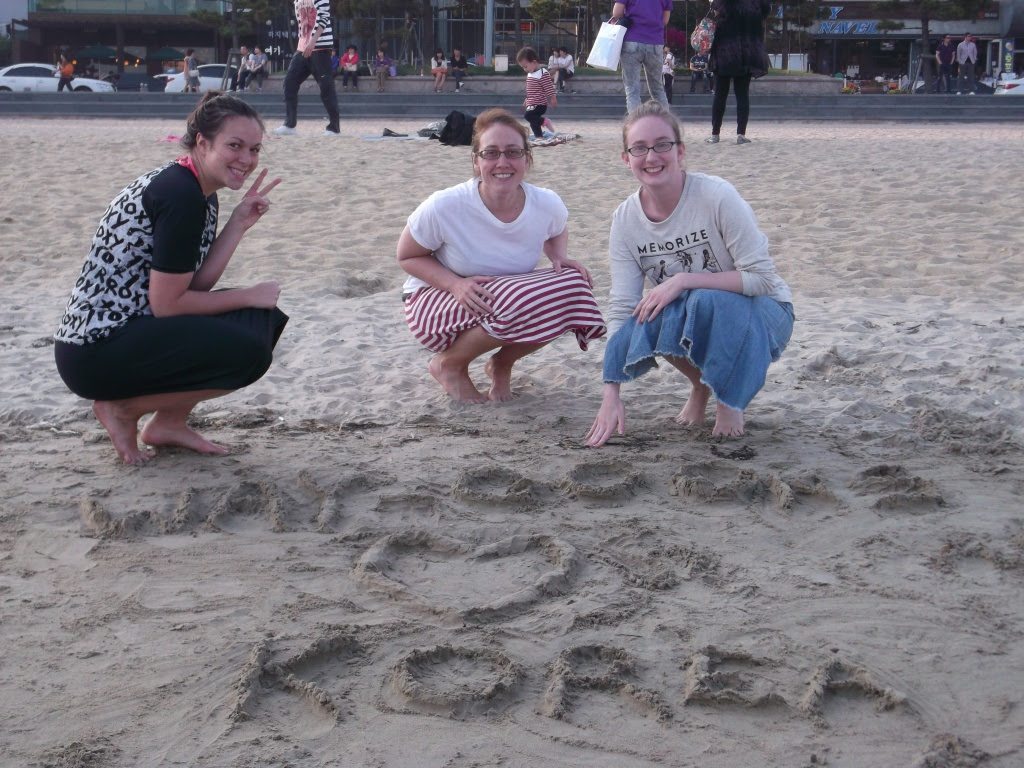 There was a beautiful bridge by the beach which I wanted to ‘hold up’ however, between Jenn’s photography skills or lack thereof, and my overly flexible hands we failed. Hence the photos of me looking either incredibly happy or incredibly retarded. The verdict still isn’t in yet. 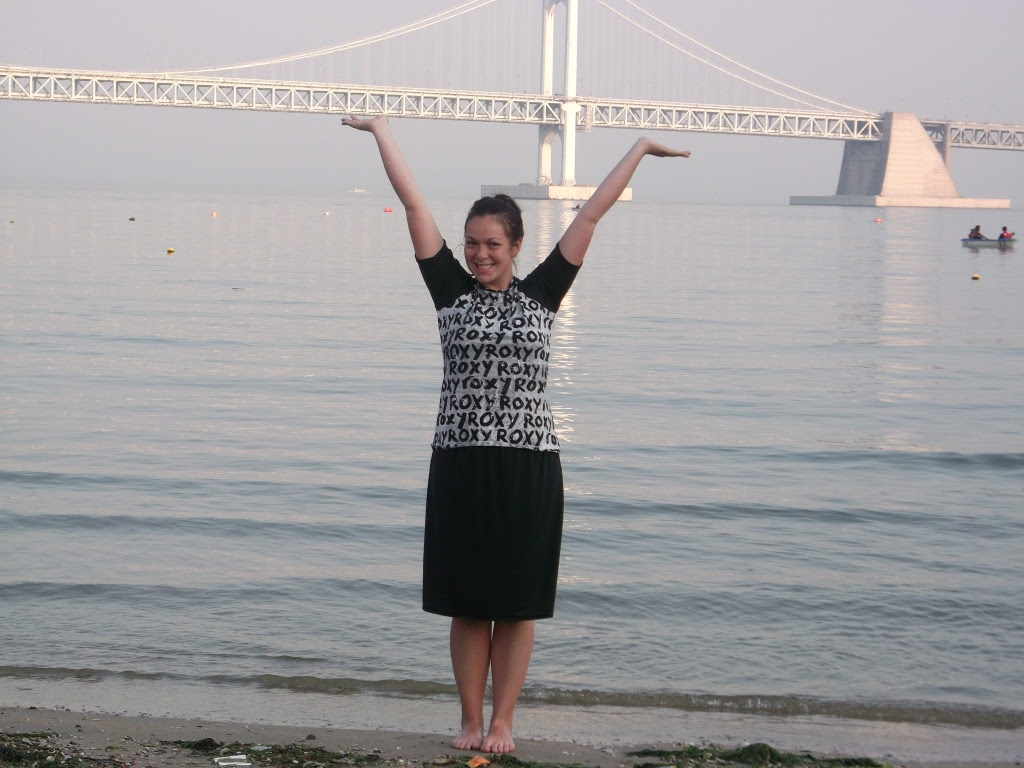 We wanted to play volley ball and Frisbee but we brought nothing with us which enabled us to play either. We stumbled upon a old man on the beach selling beach toys and found a ball. It wasn’t a volley ball but we made it work. We made a valiant attempt at volley ball and many a people had a good laugh at our failed attempts to volley back and forth. We always manage a way to provide free entertainment to the Korean people around here.
We woke up early-ish Sunday morning and got ready for church. The church was beautiful! And they served coffee during service plus they didn’t make us take off our shoes when entering the church. Three bonuses! We were blessed in many ways during/after the service. We enjoyed a wonderful time of worship and a great time of food and fellowship after the service. While we were eating, the Pastor gave us ‘money for dinner’. We were shocked! We later opened the envelope and were even more surprised to see that amount of ‘dinner money’ that they had given us: 100,00KRW. We were overwhelmed with gratitude! It was such a blessing! 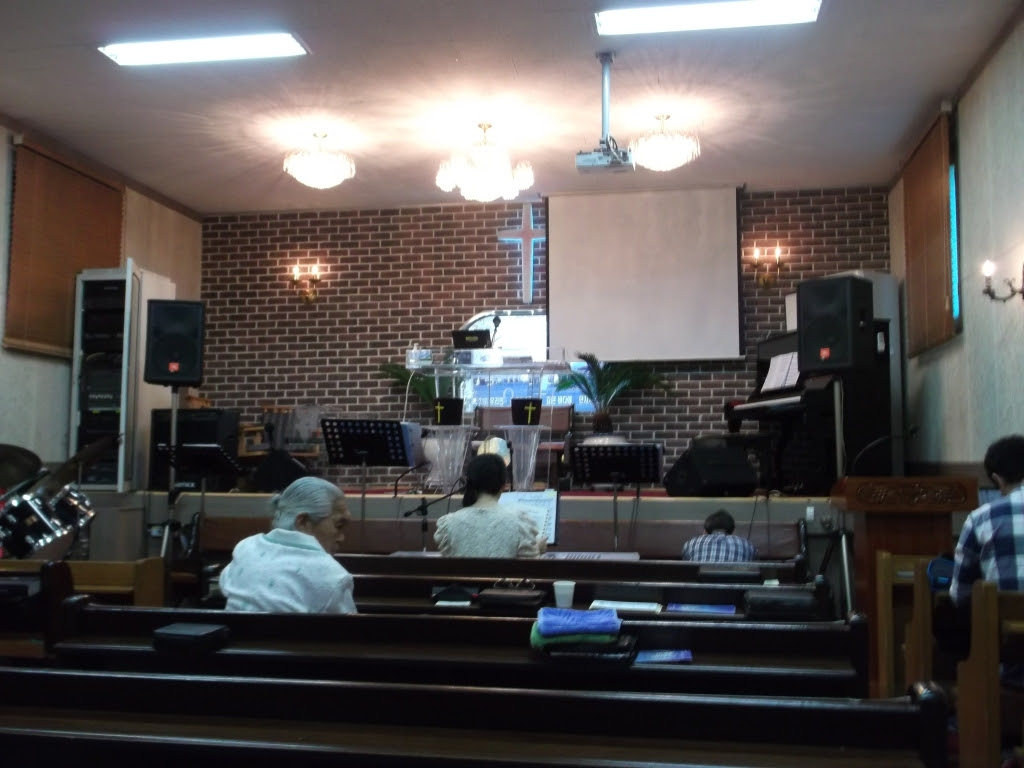 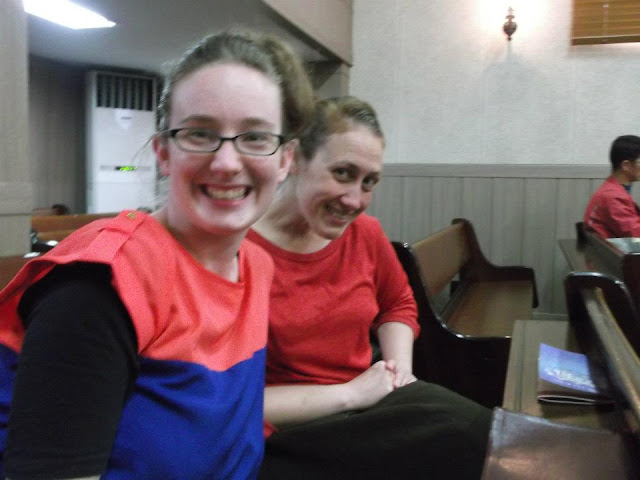 We headed to Haundae beach and spent the next eight hours on and around the beach, enjoying the sun, people watching, and eating good food. Because we were given money for dinner, we decided to treat ourselves to a place where the beef was Australian, the bacon and pork rib were from France, and the rice, chicken, and kimchi were Korean. 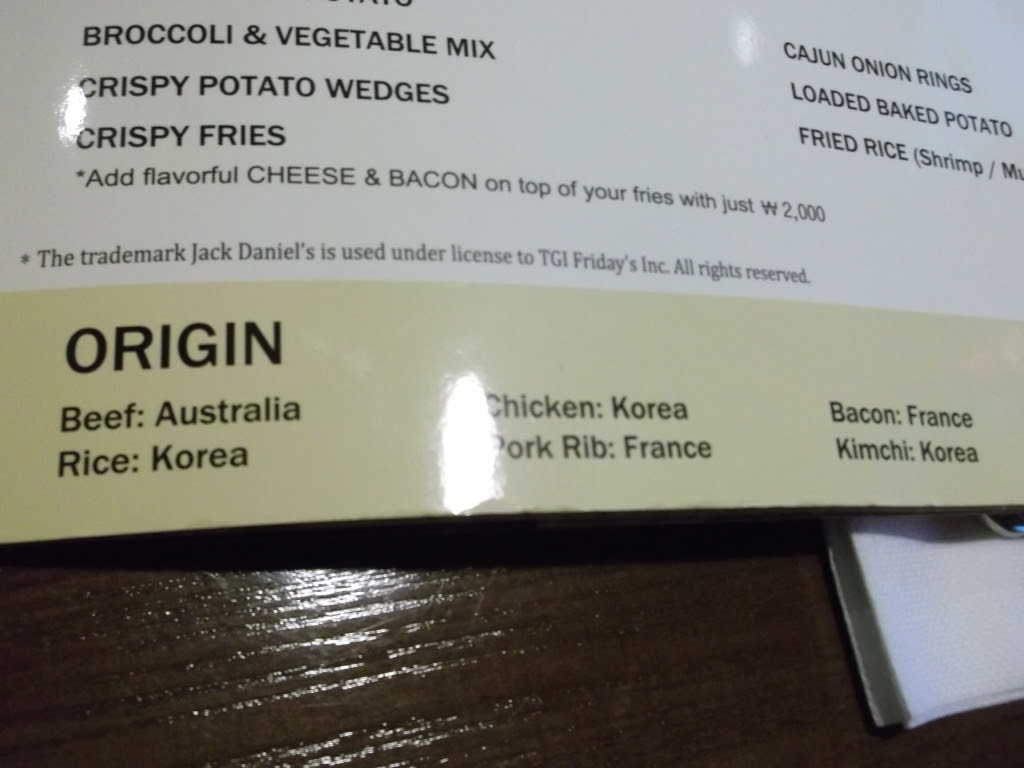 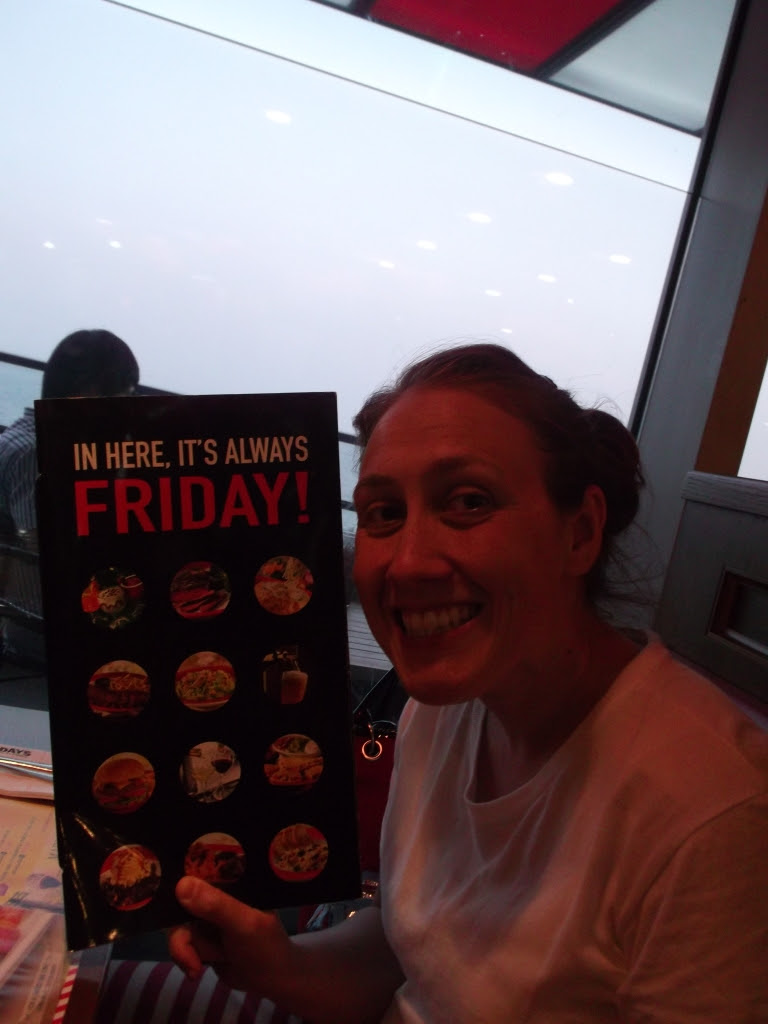 We ordered burgers, fries, and wings. 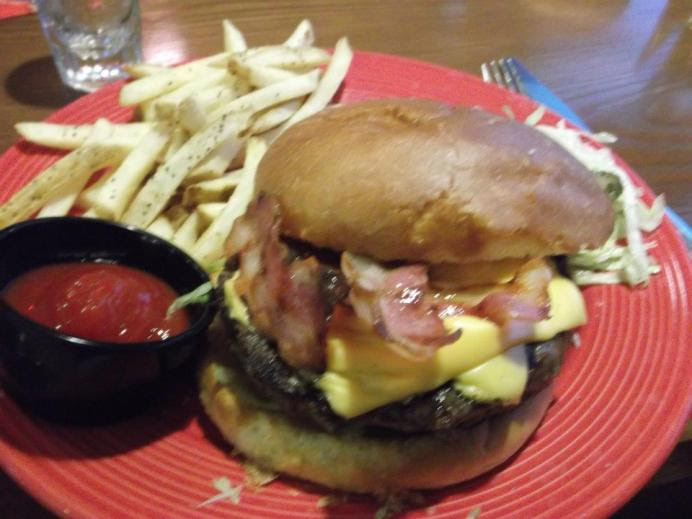 As we were leaving Friday’s I said “I want a picture on the throne”. This brought strange looks from both Heather and Jenn. I didn’t mean the great white throne but rather the stone thrones we had passed on our way into Fridays. We took several photos and several Korean people also stopped to take photos once again reminding us that what we might consider to be normal, they don’t. 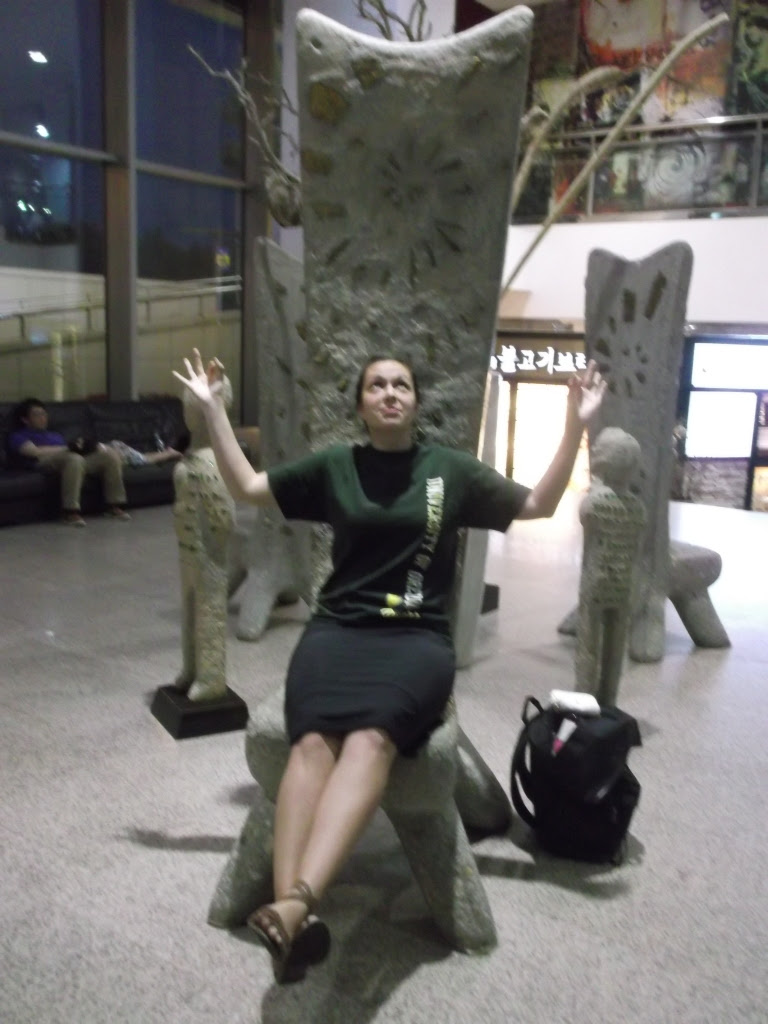 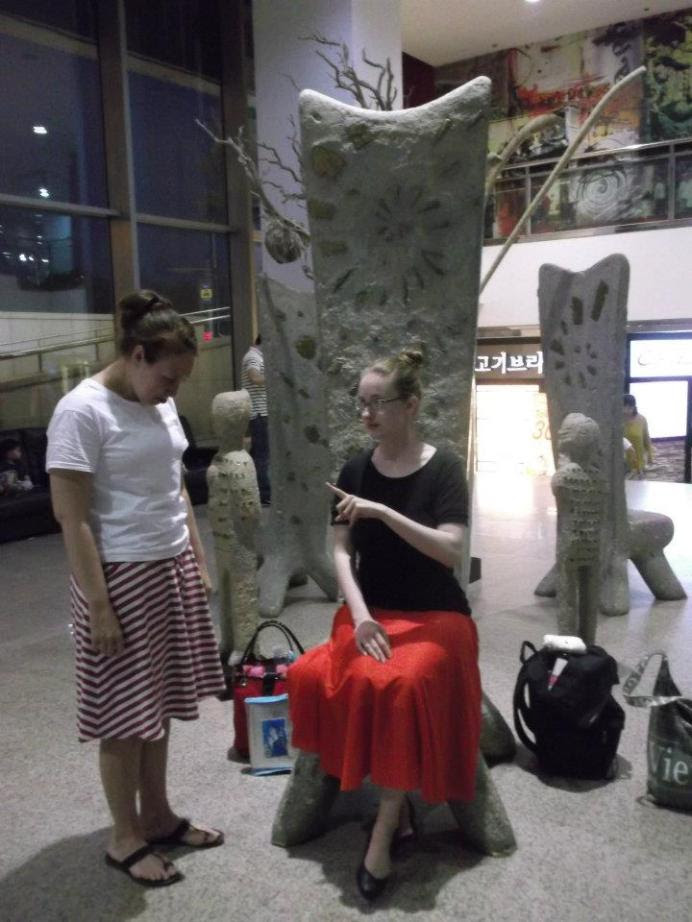 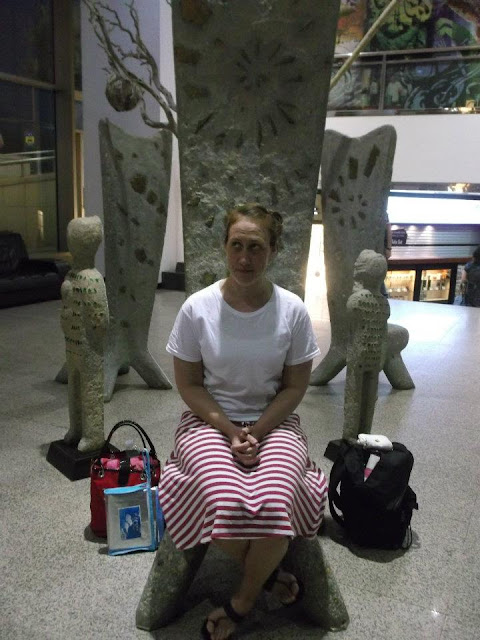 After dinner we went back to the beach for Frisbee, smores, and more people watching. As we walked along the beach looking for a place to sit, we stumbled upon the early prep for the sand festival which will take place this up coming weekend. How they make such cool designs out of sand is beyond me. 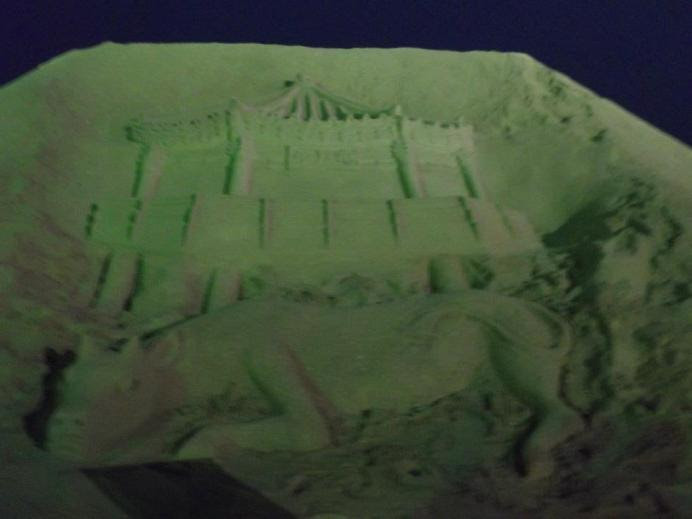 We played Frisbee for a bit, watched the fireworks and made s'mores. These weren’t just any s'mores. We didn’t have a bonfire so we had to improvise. Here’s how it worked:
Forks replaced the roasting sticks
A lighter replaced the bonfire
8 month old graham crackers replaced the fresh ones that are unavailable in Korea
Severely squashed marshmallows
and Korea’s version of Hershey bars
BOOM! we had s’mores. I would rant and rave about how good they were however i wouldn’t want to miss heaven over such a worthless lie. They weren’t bad….but you definitely couldn’t say they were good. It was definitely a good attempt. 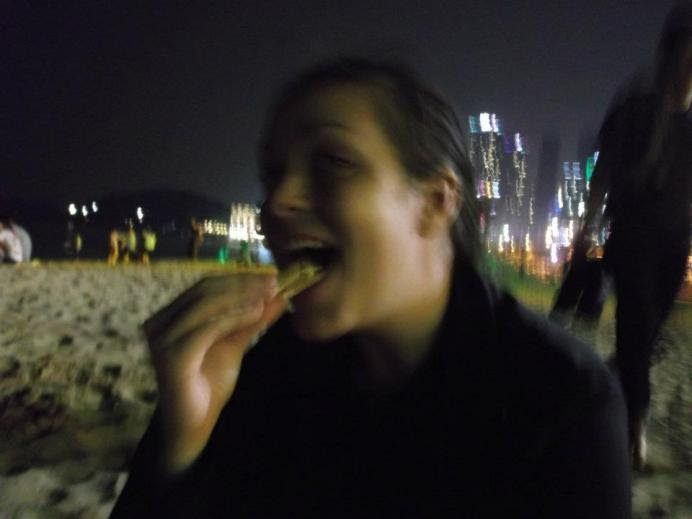 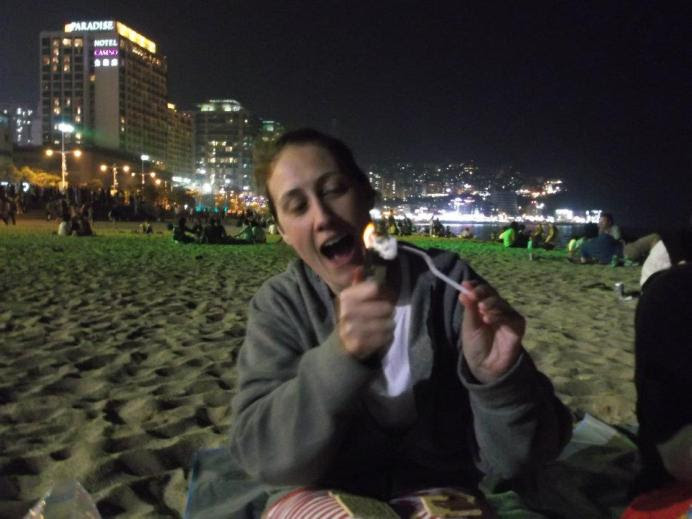 We spent the rest of our trip sleeping, exploring, killing bugs, sleeping some more, doing brain puzzles, people watching; it was such an amazing weekend! Definitely needed!! Here’s to many more great weekends in the future!
Posted by Jenn at 6:42 AM